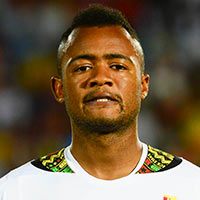 Son of Ghanaian great Abedi Pele and younger brother to Andre Ayew, football runs in Jordan’s veins. The forward followed a similar football path to his brother. Having started in France, Jordan would also move to the English Premier League, and having made steady progress in England’s top-flight this season he will be hoping for yet another solid AFCON campaign.