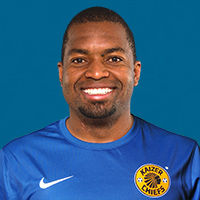 The Kaizer Chiefs goalkeeper missed South Africa’s qualification campaign for the 2015 Africa Cup of Nations campaign due to injury, but was the national team’s undisputed first choice prior to that.

If and when he reclaims the number one jersey, he will usurp Andre Arendse’s record of 67 caps as Bafana Bafana goalkeeper.

Khune is a superb shot-stopper and brilliant distributor of the ball.