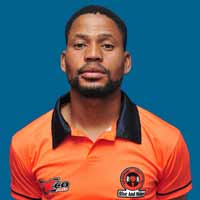 Formerly on the books of Platinum Stars, Golden Arrows and Black Leopards, Manaka is yet to establish himself as one of the best midfielders in the PSL. He is a skilled player but will have to work extra harder to convince the coach that he deserves a regular place in the team.