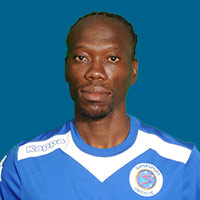 Another to join SuperSport United on a free transfer, the experienced box-to-box midfielder signed for the Tshwane club following a successful eight year stay with Kaizer Chiefs; winning every domestic title. Brings valuable experience and know how to the squad. The former Jomo Cosmos midfielder, who linked up with Stuart Baxter in the capital, has won 50 caps for Bafana Bafana and now entering the final years of his professional career. 'Yeye' certainly still has a lot of running left in his legs - made 183 league appearances for the Amakhosi. Proved his worth in his first season at the club as SuperSport United were crowned Nedbank Cup champions. Arguable one of the club's stand out players of the 2016-17 season.