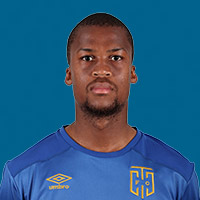 Tshepo Gumede was Cape Town City’s key figure in defence last season, with the 26-year-old playing in the majority of their matches through all competitions. The Soweto-born player, who has represented South Africa at both junior and senior international level, has also represented SuperSport United and Platinum Stars in his top flight club career.