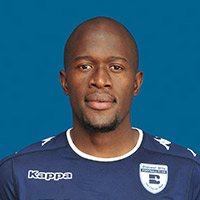 The former AmaZulu left-back joined Bidvest Wits on a permanent deal towards the back-end of the 2015-16 season, he initially joined the Clever Boys on-loan from Usuthu in January 2016. Impressive run of performances earned him a call-up to the national team for home and away 2017 African Cup of Nations qualifiers against Cameroon. Superb from dead ball situations; Hlanti scored a memorable free-kick goal on his Bidvest Wits debut against Golden Arrows. The fullback continued his impressive form in the 2016-17 season as the club claimed MTN8 and Absa Premiership glory. Hlanthi made the left-back position his own, featuring close to 40 times in a memorable season for the club. Was rewarded for his efforts with the Coach's Award.