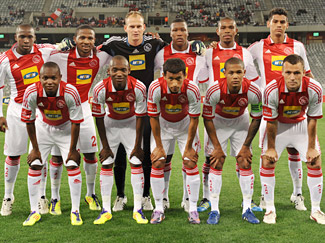 In just over a decade of existence, the Urban Warriors have twice narrowly missed out on winning the League, but they have won three domestic cup competitions and remain a dangerous cup side.
They have scooped the Rothmans, Absa and Telkom Knockout cups before, but have never won a top 8 trophy.
So this year’s MTN8 gives new coach Maarten Stekelenburg a great chance to ease the pain of seeing Orlando Pirates take the League title away from Ajax on goal difference in May.
With the new coach comes a new skipper. Midfield sensation Granwald Scott, a youth product who seems to have been around forever having made his debut as a teenager, has been deemed fit to lead the team and much will rest on his and George Maluleka’s shoulders in the middle of the field.
Without Thulani Serero, much of the spark will need to come from the likes of Maluleka and Khama Billiat. You may just see Maluleka in a more offensive position while Stekelenburg will look to Brent Carelse’s experience and versatility to hold things together.
Carelse will also add value in that Ajax face SuperSport United first up, a team that Carelse knows only too well.