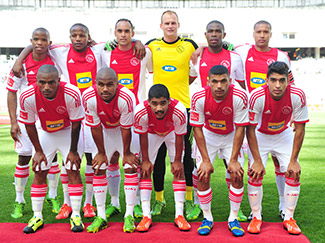 Ajax Cape Town were eliminated from last year’s Telkom Knockout in the round of 16 after a 2-1 defeat to SuperSport United, something coach Roger De Sa will be looking to improve on in 2014.

Ajax was formed in 1999 as an amalgamation of two top-flight teams in Cape Town Spurs and Seven Stars.

The link-up with Ajax Amsterdam was forged as the Dutch club looked to expand their footprint on the African continent and they currently own 51% of the club.

Steven Pienaar is one notable player who has moved from Cape Town to Amsterdam, but others in more recent years include Eyong Enoh and Thulani Serero.

Ajax usually play their home games at the Cape Town Stadium, but do sometimes use the Athlone Stadium if the flagship ground is not available.

The Urban Warriors won the Telkom Knockout in 2008 after defeating Orlando Pirates 2-1 in the final.

They also reached the final the following season but lost to Kaizer Chiefs.