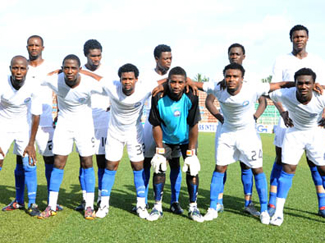 ‘The People’s Elephant’ have been Nigeria’s most successful club in the last decade or so.
They won the CAF Champions League twice in 2003 and 2004 and have also won the Nigeria Premier League six times.
They have also clinched the country’s FA Cup twice.
Based in Aba, southeast Nigeria, Enyimba were founded in 1976.
The team have produced top-class players like Philip Osondu, Vincent Enyeama, Ahmed Garba aka Yaro Yaro, Obinna Nwaneri, Ezenwa Otorogu, Stephen Nworgu and Onyekachi Okonkwo.
It was during the tenure of former Abia Governor Orji Ozor Kalu that Enyimba enjoyed their most successful spell to date, winning the CAF Champions League back-to-back as well as five league titles and two FA Cups.
Football nut Kalu provided the funds and the personal support to his boyhood club to reign over Africa.
Such support has waned under the new Abia State government of Theodore Orji and this could well have caused the club’s indifferent start to the defence of their NPL championship this season.
However, continuity personified by club chairman Felix Anyansi-Agwu who has supervised all the victories of the club has held the team together and they are now back contesting for Africa’s foremost club title.
Enyimba top stars are gifted forward Josiah Maduabuchi, defenders Nnaemeka Anyanwu, Emmanuel Anyanwu, Valentine Nwaebili as well as strikers Uche Kalu and Victor Barnabas.