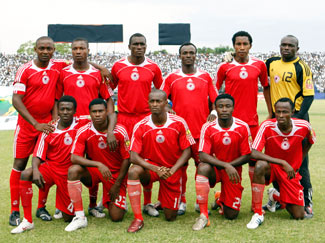 Heartland FC are no strangers to Africa’s top club competition, having twice made the final, including in 2009 when they lost to TP Mazembe of the DR Congo.

The club were first founded in 1976 and known as Iwuanyanwu Natioanle. They played five ties in the old-style African Champions Cup and also finishing runners-up in 1988.

The side were Nigerian league champions four years in a row between 1987 and 1990 and also won a rare league and cup double in Nigeria in 1988, when they added the FA Cup to their league success.

Heartland started their existence as Spartans FC in 1976 but became Iwuanyanwu Nationale in 1985 when the club was sold by the Imo State government to club side to Chief Emmanuel Iwuanyanwu, whose resources were able to elevate the side into a competitive force almost overnight.

Such was the extent of their financial clout that the club went to Brazil for training and in 1988 played for the first time in the Champions Cup, reaching the final where they lost to Entente Setif of Algeria.

The first leg of the final was won 1-0 in Ibadan but the second leg lost 4-0 away in Constantine. But at the same time the club won their first league title and beat Flash Flamingoes 3-0 in the FA Cup final.

The club lost the next year in the FA Cup final, to BCC Lions, but won the league again to continue their dominance of the Nigerian club scene.

But a tragic air crash in Algeria in 1996 saw two players lose their lives after the team set off from a Champions Cup match in Tunisia, and the club lost its dominant position.

In 2006, the Imo State Government bought the club back and renamed it Heartland FC.

They are coached by Kelechi Emetole with assistance from Okey Emordi, who had success in Africa’s top competition in the past with Enyimba.