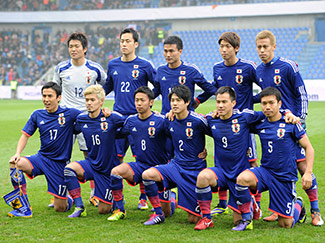 Japan have qualified for the World Cup since 1998 in France, where they failed to go past the first round.As co-hosts of the 2002 edition, they reached the knockout Round of 16, where they lost out 1-0 to Turkey.
They were eliminated in the group stage at the following World Cup in Germany, but returned to South Africa 2010 to equal their best performance at the finals by reaching the Round of 16.
Paraguay defeated them on penalties after scores stood at 0-0.After this World Cup, Takeshi Okada quit and was replaced by former AC Milan coach Alberto Zaccheroni.
They became the first team outside hosts Brazil to qualify for the 2014 World Cup after they drew 1-1 with Australia.
They suffered only two losses in the qualifying tournament, to Jordan and Uzbekistan.