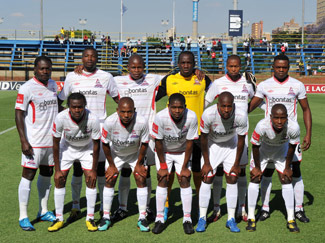 Free State Stars were surprise sixth-place finishers in the Absa Premiership in the 2011/12 season and up until the final few rounds of the campaign were very much in contention for the League title.
Coach Steve Komphela has a knack of getting the best out of his players and he managed to turn a side of honest hard-workers into title challenges.
Having lost many of their top names for the 2012/13 campaign he will find it difficult to replicate that though.
The club’s history in the MTN8 competition does not read well and they will certainly be looking to build on that this year.
They were knocked out in the first round of the 2001 tournament by Mamelodi Sundowns, before going down to the same opposition in 2008. Both of those were 1-0 defeats after extra-time.
They also lost in the first round in their last appearance in the competition in 2009, a 1-0 defeat to eventual winners Lamontville Golden Arrows sealing their fate.
So the side can make history by reaching the semifinals this season, something that would be another feather in the cap of the Bethlehem-based side.