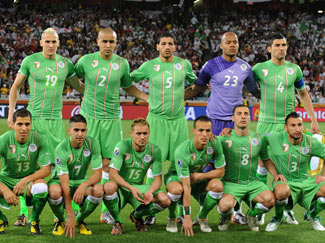 Algeria are enjoying a major revival in their football having qualified for the 2010 World Cup after a tense play-off with Egypt, and then a decent performance in the actual World Cup has seen their team’s confidence really grow.

This resurgence has come mainly off the back of a change in FIFA ruling that allows players over the age of 21 who have turned out for countries in junior football, to switch allegiances if they qualify for another senior international team.

This has seen an influx of French-born players into the Algerian squad, who may well now be dark horses for the 2012 Nations Cup event. It would be their second continental triumph following success in the 1990 tournament that they hosted, having previously been runners-up in 1980 in Nigeria.

In 2010 Nations Cup though they did start poorly with a 3-0 loss to Malawi in their opening group match.

However, thereafter they managed to find their form and made their way to the semi-finals of the competition beating the highly rate Ivory Coast along the way.

Sadly, for them, they finished the tournament poorly as they were hammered in the semi-finals losing 4-0 to eventual winners Egypt, and then lost the third/fourth play-off game losing 1-0 to Nigeria.