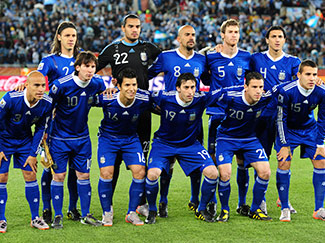 Argentina is one of the legendary nations of the FIFA World Cup tournament. Brazil 2014 will be their 16th appearance at the World Cup.
The Albicelestes has appeared in four World Cup finals, including the first final in 1930, which they lost 4–2 to Uruguay.
Argentina won in their next final in 1978, beating the Netherlands 3–1. Argentina led by Diego Maradona won again in 1986, a 3–2 victory over West Germany.
Their most recent World Cup final was in 1990, which they lost 1–0 to Germany by a much disputed penalty.
They are currently coached by Alejandro Sabella and have four time Ballon D’Or winner Lionel Messi as their captain.
Argentina finished first in the CONMEBOL 2014 World Cup qualifying tournament, which proved they are a legitimate contender for the world title in June of 2014 in Brazil.
Of course, the grouping this year did not include Brazil since they did not have to qualify due to being the host country.