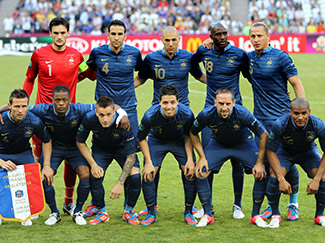 France will feel they have a point to prove in Brazil after a disastrous showing at the 2010 FIFA World Cup in South Africa where they bombed out in the group stages amid mutiny within their squad and off-field squabbles.

It was a major embarrassment for French football, not necessarily the early exit, but the manner in which it came about, but they have managed to pick themselves up since then.

Many of that squad were purged and replaced with a younger group who are getting better as time goes by.

They qualified for Brazil via the playoffs after finishing second in a pool that also contained world champions Spain, but scraped past Ukraine over two legs.

The side is currently coached by one of the stars of their 1998 World Cup win, Didier Deschamps, a divisive figure in France who is either loved or hated.

That 1998 success was France’s only World Cup victory after 13 tournaments, which includes a showing at the very first in Uruguay in 1930. Their next best finish was runners-up in 2006, while they also finished third in 1958 and 1986.