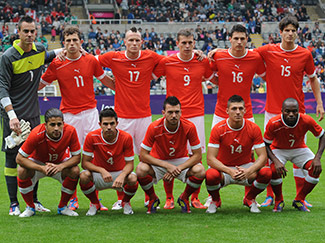 The Swiss national football team are also known as the Schweizer Nati (German), La Nati (French) and Squadra nazionale (Italian).
They have qualified for the World Cup on nine occasions and have reached the quarterfinals on three occasions, in 1934, 1938 and when they hosted the tournament in 1954.
They have made three European Championship appearances, in 1996, 2004 and as hosts in 2008, but have failed to progress from the group stage on all three attempts.
They are coached by German national Omar Hitzfeld since August 2008 and captained by Napoli midfielder Gokhan Inler.
They finished on top of Group E ahead of Iceland, Slovenia, Norway and Albania and Cyprus with seven wins and three draws to qualify for the 2014 FIFA World Cup in Brazil.
Their other key players include Fulham defender Philippe Senderos, Eintracht Frankfurt midfielder Tranquillo Barnetta and FC Zurich forward Mario Gavranovic.