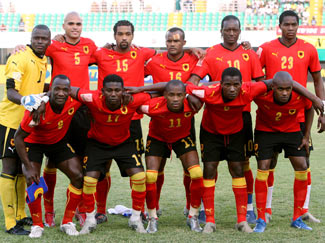 Angola failed to fire at the 2010 Africa Cup of Nations that they hosted, losing 1-0 in the quarterfinals to eventual finalists Ghana.

The result matched their best-ever finish though, having also finished in the Last 8 at the 2008 tournament, but they would like to kick-on from that as they prepare for the 2012 finals in Equatorial Guinea and Gabon.

They have roped in French coach Herve Renard to help them do so, and with Renard having performed wonders with the Zambian side at the last finals, there are hopes he can spark an Angolan squad that has plenty of potential in its ranks.

There are plenty of good youngsters mixed in with the experienced old heads, but they will look to the likes of Real Valladolid striker Manucho, once on the books of Manchester United, for goals as he looks to put behind him a miserable individual campaign at the home finals.

The majority of the squad plays in the local League though and that, in a way, may be helpful to Renard as he looks to learn the nature of his players as quickly as possible.