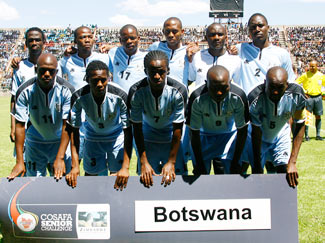 The Botswana national football team is one of the weaker sides in the competition and has never qualified for the African Cup of Nations. With that being said they have only attempted to qualify for the African show piece since 1994.

In their first African Nations Cup qualifying campaign they were drawn to play a two-legged preliminary fixture against Lesotho and although Botswana drew in Lesotho, they lost 4-0 at home and were eliminated.

In their second African Nations Cup qualifying campaign, Botswana was in a group that contained Angola, Guinea, Mali, Mozambique and Namibia. They finished sixth in the group with only two draws (both with Namibia) and a horrible goal difference of negative 22, conceding 27 goals in total.

In 2002 they were drawn against Madagascar, and this time even though they won 1-0 at home, (their first win in an African Nations Cup qualifying) they lost 2-0 away and were eliminated.

In 2004 Botswana were drawn in a group that had Congo DR, Libya and Swaziland. They finished 4th in the group with 3 draws (two home and one away). 2006 saw them in a group joined by Guinea, Kenya, Malawi, Morocco and Tunisia. Botswana showed marked improvement and finished the campaign in fifth place with three wins.

In their fourth attempt to qualify for World Cup, Botswana had entered directly into the second round of African qualifiers and was drawn to play Côte d'Ivoire, Madagascar and Mozambique. Botswana finished bottom of the group with five points from six matches and a 3–8 goal difference