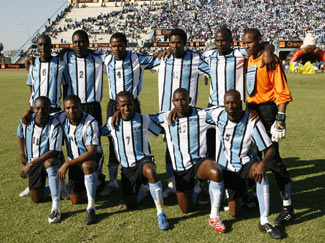 Botswana’s senior national football team are known as the Zebras. They have never qualified for the FIFA World Cup, through they only entered the preliminary stages for the first time prior to the 1994 tournament in the United States of America.

The Zebras have never qualified for the CAF Africa Cup of Nations either, and will be targeting this as their main aim in the coming years.

Botswana’s national team play their home games at the Botswana National Stadium in Gabarone. They are coached by Stanley Tshosane and their captain, who is also their most capped player and record goal scorer, is the South African-based Dipsy Selolwane. The striker-cum-midfielder presently plays his football with Ajax Cape Town and has also had spells in America and Denmark.

The top flight league in the Southern African country is presently known as the Mascom Premier League. It was first formed in 1966 and the most successful club is Township Rollers from Gabarone, who have nine titles to their name. The next most successful clubs are Botswana Defence Force XI (seven league titles) and reigning champions Gabarone United (six league titles).