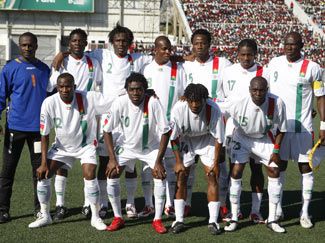 The Burkina Faso national football team, nicknamed Les Etalons (The Stallions), will be making their ninth appearance at the 2013 Africa Cup of Nations, having qualified as Upper Volta prior to 1984.

Their best finish was back in 1998 where they ended in fourth place during the tournament which they hosted; however, their recent performances have seen them failing to get past the group stage in five consecutive attempts between 2000 and 2012.

As a result Belgian coach Paul Put was given the reins in March 2012, taking over from Paulo Duarte, as they look to improve their record in the competition.
The 56-year-old started his coaching career with Belgian sides Geel, Lokeren and Lierse, before he was banned for three years by the Royal Belgian Football Association for his alleged involvement in a match-fixing scandal. From there he coached the Gambia national team between 2007 and 2011, before he was appointed to lead the Stallions.

The Burkinabe will be counting on star striker Moumouni Dagano, who currently plays for Al-Sailiya Sport Club in Qatar, and is the country’s top goal scorer of all time.

They also have a number of top players who ply their trade in the Ligue 1 in France like FC Lorient forward Alain Traore, Stade Rennais midfielder Jonathan Pitroipa, as well as Lyon defender Bakary Kone, who will all be expected to bring their international experience to help the side reach the knockout stages in South Africa.
Tournament Review:
Burkina Faso were the surprise team of the 2013 Africa Cup of Nations in South Africa after defying all odds to reach their debut tournament final.
The Stallions’ feat in South Africa ended an agonising five successive first round Africa Cup exits in which they failed to record a single win.
However, under Paul Put in South Africa they were unstoppable and were also key in ending Zambia's brief reign as champions with a scoreless draw in their final Group C match.
Burkina Faso went on to eject Togo and Ghana in the quarterfinals and semifinals respectively, to reach the last four for the first time since 1998.
Key to that race to the final where they lost 1-0 to Nigeria on February 10 in Johannesburg, were striker Alain Traore and midfielder Jonathan Pitroipa.
Traore hit three goals in the group stage before injury ruled him out of the tournament.
With their talisman Traore out of the tournament, Pitroipa's creative force and instinct for goal were to prove even more valuable in the knockout stages.
This happened in the midst of his controversial suspension for the final before CAF expunged the dismissal, after referee Slim Jedidi admitted he erred in sending him off against Ghana in the semis.