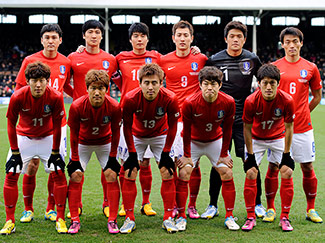 South Korea have appeared at nine previous FIFA World Cups, and Brazil 2014 will mark their eighth successive participation in the tournament in a sequence that started back in 1986.

The ‘Taegeuk Warriors’ famously reached the semifinals of the 2002 World Cup as co-hosts (with neighbours and rivals Japan) and got as far as the last 16 in South Africa 2010, where they were narrowly beaten 2-1 by Uruguay.

Korea are two-time champions of the AFC Asian Cup and have also appeared in the CONCACAF Gold Cup (as special guests) and the Confederations Cup.

They are coached by local hero Hong Myung-bo (who played in four successive World Cups from 1990 to 2002) and captained by Bolton Wanderers midfielder Lee Chung-Yong.

The ‘Taegeuk Warriors’ finished second behind Iran in Group A in the final round of 2014 qualifying in the AFC Confederation.