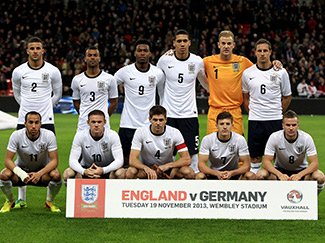 England will be making their 14th appearance at a FIFA World Cup in 2014 and have qualified for the last five successive editions of the tournament.
The ‘Three Lions’ first appeared at a World Cup in Brazil 1950, having not entered for the 1930, ’34 and ’38 editions despite being the nation credited with inventing football.
England’s first and only World Cup triumph arrived on home soil in 1966 when they defeated West Germany in the final.
Since then they have been one of the great underachievers, with a semifinal showing in 1990 the only time that they again reached the sharp end of a World Cup.
In 2010 they lethargically progressed from a kind group only to be hammered 4-1 by Germany in the last 16.
England, who are coached by former Fulham and Liverpool manager Roy Hodgson, qualified for Brazil 2014 by topping Group H in the UEFA zone ahead of Ukraine.