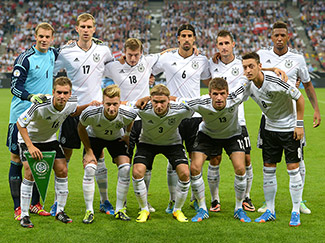 Germany have only missed two FIFA World Cup finals – they did not enter in 1930 and were banned in 1950 – and are the second most successful nation after Brazil in number of trophies won.

Their three triumphs came in 1954, 1974 and 1990, while they have also been runners-up on a further four occasions and claimed third in another four, including the last two tournaments.

They are a powerhouse of the world game and will be among the favourites in Brazil, building on a young side that delighted in South Africa four years ago.

At the helm is coach Joachim Löw, who would have been in charge for the side for eight years at the completion of the 2014 finals in Brazil.

He commands a vastly experienced squad that has four players with 100 caps or more, Philipp Lahm, Bastian Schweinsteiger, Lukas Podolski and Miroslav Klose, with Per Mertesacker set to reach that number before the Brazil finals too. Yet they have very few players over the age of 30, which suggests they have kept a core group of players together for the last four years and beyond.

They have stars in every position, but their top trio are likely Bayern Munich stalwart Schweinsteiger, his clubmate Lahm and Arsenal playmaker Mesut Özil.

They breezed into the finals by winning nine of their 10 qualification matches, with the other one drawn.