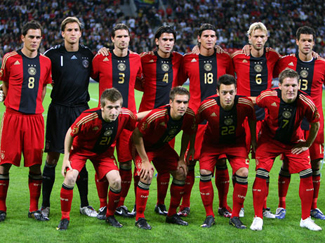 Germany have missed just two World Cup finals, the very first in 1930 when they withdrew due to the long passage to Uruguay, and 1950 when they were banned from particpating in the aftermath of World War II.
They are the third most successful nation in the history of the tournament behind Brazil and Italy with three wins and four final appearances.
The first of those victories came in 1954 when the team, then known as West Germany, defeated Hungary in the final, which was something of a surprise at the time.
They had to wait another 20 years for their next triumph, beating the Netherlands 2-1 in the final on home soil in Munich, while they repeated the feat in 1990 as they overcame Argentina to win the crown in Rome. They have also finished as runners-up in 1966, 1982, 1986 and 2002.
Read more about Germany's Group D Opponents