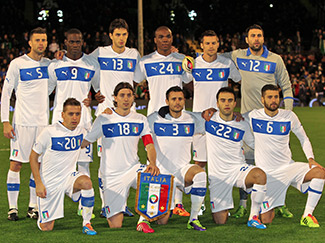 The Azzurri are the second most successful team on the global stage participating in next year’s 2014 World Cup.
Having lifted the World Cup on four occasions, Italy have an uncanny history of reaching the final every 12 years and Cesare Prandelli will be hoping to mimic the success of Marcello Lippi’s 2006 winning squad when they arrive in Brazil next June.

The former Fiorentina coach has managed to formulate a solid mix of youth, extraordinary talent and experience all in one team.
It has so far proven to pay off, seeing them finish top of their qualifying group ahead of Denmark and Czech Republic, all while also reaching the finals of the Euro 2012 with more or less the same squad.

It may be a tall ask heading across the Atlantic to Brazilian soil to lift their fifth trophy, but they will certainly be favouring their chances of a final four berth.
Previous successes in the tournament includes 1934, 1938 and 1982.