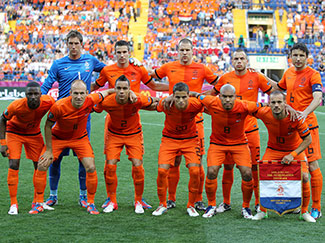 Louis van Gaal’s side come into the tournament with a rather unfortunate statistic- they’ve played the most World Cup finals without having lifted the glittering gold trophy.
They finished second in the 1974, 1978 and 2010 World Cups, losing to West Germany, Argentina and Spain respectively.

Even during their most successful era of the ’70’s, where their football was described as ‘Total Football’, the silverware continued to elude them.
The same fortunate occurred in South Africa when they narrowly missed out on the title after losing to Spain on penalties in a dramatic final at Soccer City in July 2010.

A team that excels on the big stage, next year they will be out to mirror the same promise and form they showed in Mzansi, only this time their hunger to lift the trophy designed by Silvio Gazzaniga has them salivating at the mouth.