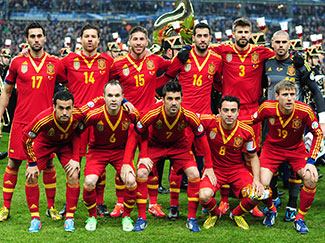 The Spain national football team is also known as La Roja (The Reds) or La Furia Roja (The Red Fury).
They have participated in a total of thirteen of nineteen FIFA World Cups and are currently the reigning world champions having won the title in South Africa in 2010.
They have also participated in fourteen European Championships, winning the competition in 2008 and 2012.
They are coached by Spanish coach Vicente del Bosque since March 2008 and captained by Real Madrid goalkeeper Iker Casillas.
They finished in first place in Group I ahead of France, Finland, Georgia and Belarus to book their place for the 2014 FIFA World Cup in Brazil, winning six and drawing two of their qualifiers.
Their other key players include Real Madrid defender Sergio Ramos, Barcelona midfielder Andres Iniesta and Atletico Madrid forward David Villa, who is the country’s all-time top scorer.