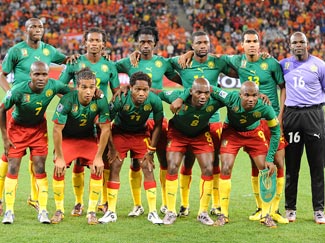 Drawn in Group E with Senegal, DR Congo and Mauritius the four time African Champions Cameroon will be favoured to come through and qualify for their 17th Africa Cup of Nations tournament.

It might be premature to be thinking of a fifth African crown, as they go through the qualifying campaign thinking of winning a fifth title will most certainly be a motivating factor for the Indomitable Lions, who will be looking for redemption after a disappointing time at the 2010 FIFA World Cup in South Africa where they lost all three of their group games.

On the back of their rather dismal outing at their sixth FIFA World Cup and for the first time they did not pick up even a single point at the World Cup, Coach Paul Le Guen quit and Cameroon need to rebuild in order to regain their reputation as African and World beaters.

The process to restore their pride should begin with a clear out of the old guard such as the veteran defender Rigobert Song as well as Geremi Ntjap and goalkeeper Souleymanou Hamidou.

Samuel Eto’o is still very much the kingpin of the team and aided by a new generation of hard working players the likes of Joel Matip, Eric Choupo Moting and Arsenal’s Rigobert Song Cameroon can rise again.

The inclusion of Andre Bikey who missed out on the World Cup will help add further strength to the Cameroon squad, who do have youth on their side and should use the 2012 Nations Cup Qualifying process to launch an assault for a fifth title and beyond that build for the 2013 event which they will be hosting as well as the 2014 World Cup in Brazil.

In the immediate future Cameroon will be looking for a new coach to lead them through what should be an easy qualification campaign into the 2012 Nations Cup, the quicker their 2010 World Cup experience is forgotten the better off they will be.