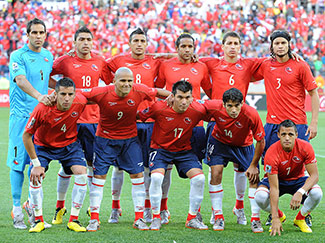 They have appeared in eight World Cup tournaments and were hosts of the 1962 FIFA World Cup, finishing in third place, the highest position the country has ever achieved in the World Cup.
They qualified for the 2014 FIFA World Cup on 15 October 2013 with a win against Ecuador.
The Chileans finished third in their South America World Cup qualifying tournament.
The finished behind Argentina and Colombia in that qualifying campaign.
Alexis Sanchez is Chile’s most important player and is the man to watch in Brazil if La Roja are going to make an impact.