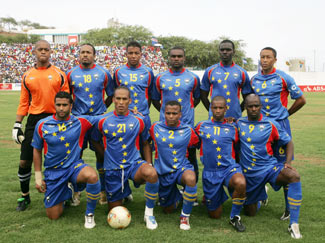 The beautiful archipelago islands of Cape Verde off the West Coast of Africa have never qualified for either the FIFA World Cup or the CAF Africa Cup of Nations.

Their national football team is known as ‘Tubarões Azuis’ (Blue Sharks) or ‘Crioulos’ (Creoles). They came close to qualifying for the Nations Cup in 2006, at one time lying second in a group behind South Africa.

Cape Verde did not enter the World Cup preliminary stages from 1930 to 1998 and only attempted to qualify for the Nations Cup in 1994 and then from the year 2000 onwards. The Blue Sharks have won the Amilcar Cabral Cup once (2000) and the Lusophony Games once (2009).

The Cape Verdean Championships sees the champions of nine islands play-off against one another. The Sao Vicente and Santiago islands have produced 12 champions each. The most successful team is Sporting Clube de Praia, who are also the reigning champions.