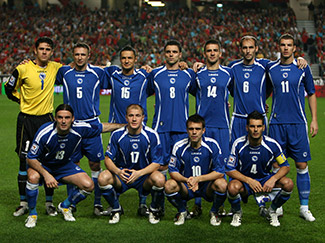 The Dragons will be the only nation making their World Cup bow in Brazil with their qualification coming some two decades after gaining independence from the old Yugoslavia.

They missed out in the playoffs for the 2010 World Cup in South Africa and also the 2012 European Championships, making this their first finals appearance.

They finished top of their qualifying pool this time round, just ahead of Greece on goal-difference, but scored a healthy 30 goals in their 10 matches to give a hint of their attacking prowess.

That largely comes from their star names Edin Dzeko of Manchester City,  Stuttgart's Vedad Ibisevic and Miralem Pjanić of Roma.

They won eight of their 10 qualifies, with just a single defeat, and if they get a favourable draw should be considered a dangerous opponents with the potential to be quarterfinalists at least.

The side is coached by Safet Sušić, who had a wonderful career at Paris St Germain as an attacking midfielder in the 1980s, where he is still revered today for his goal-scoring exploits.

He has been in charge of the side since 2009, which will make him one of the longest serving coaches in Brazil.