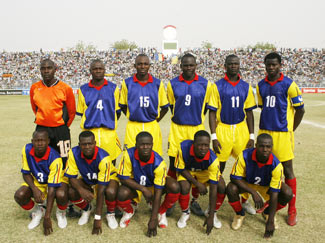 Chad have been in and out of qualifiers for the Africa Cup of Nations in the last few years, though they did appear in the preliminaries for the 2012 and 2013 tournaments, and now again for 2015.

The country was disqualified for the qualification tournament for the 2010 finals in Angola after failing to honour an away fixture in Sudan.

The team are currently led by coach Modou Kouta and play their home games at the Stade Nacional in N'Djamena, where temperatures often reach stifling levels during matches.

Chad have never qualified for the Africa Cup of Nations finals before and it would be a shock were they to do so in 2015.