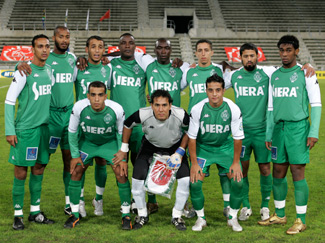 Raja Casablanca may have had to work their way through the 2011 CAF Champions League elimination phases to qualify for the group phase, but they have actually played only four matches en-route to the last eight.
They crushed Tourbillion 10-1 in the first leg of their preliminary round, and the Chad side withdrew before the return game.
In the first round of qualifiers they sneaked past Stade Malien, advancing on the away goals rule after a 2-2 aggregate draw over the two legs.
In the second round they again survived by the skin of their teeth in a one-off match against Cote d’Ivoire’s ASEC Mimosas. Trailing 1-0 in the dying minutes, Mohsine Moutouali netted a last-gasp equaliser and the Moroccans went on to win the penalty shootout.
The Green Eagles are one of the most successful teams in Champions League history, winning it three times: 1989, 1997 and 1999.
They also appeared in the final in 2002 when they were beaten 1-0 by Zamalek.
Coach Mohamed Fakhir masterminded Raja’s run to the Moroccan Premier League in 2011 and will look to guide them beyond the group phase in an effort to clinch a fourth continental crown.