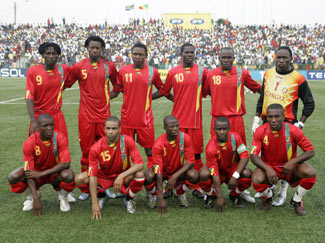 Congo are going through something of a rebuilding phase as they try to develop a side that can compete on the continental stage once more.

Under well-travelled Serbian-French coach Ivica Todorov they have an exciting group of youngsters, but one that now needs to push on and prove that they are a generation of players who can bring success to the country.

Todorov knows the African scene well having also coached clubs in Morocco, Tunisia and Gabon, as well as the national side of Burkina Faso.

Congo's last appearance at the Nations Cup finals came in 2000, while their only success in the competition was in 1972 when they beat Mali 3-2 in the final.

Most of the current squad are based in France or the lower leagues in Germany, but the star man is undoubtedly striker Lys Mouithys, who plays for Wydad Casablanca in Morocco and is the key source of goals for the side.