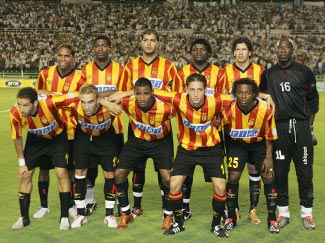 Tunisian giants Esperance Sportive de Tunis are the defending CAF Champions League champions and will be looking to win the tournament for a third time in their history, having first won it in 1994.
The ‘Blood and Gold’ were founded way back in 1919 and have been a dominant force in Tunisian football since the latter half of the 20th century.
As reigning champions, Esperance were given a kind draw in the preliminary stage of the 2012 tournament and they duly defeated Birkama United of Gambia and Zimbabwe’s Dynamos 4-2 and 7-1 (on aggregate) respectively.
They find themselves in Group B alongside fellow Tunisians Etoile Sahel, Nigeria’s Sunshine Stars and ASO Chlef of Algeria.
The games against Etoile and ASO will be typically fierce and passionate North African encounters, while Stars will pose a more markedly physical threat, but Esperance will still be confident of booking a place in the semifinals.
The man in charge is Michel Decastel, a Swiss coach who took charge of the team earlier this year. His last post was as head coach of Wydad Casablanca, the team Esperance beat in the final of the 2011 Champions League.
The Blood and Gold have an experienced squad of players, most of whom have represented the senior Tunisian national team.