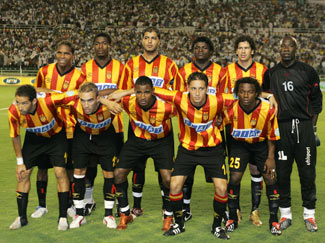 Esperance have been regular competitors in the African Champions League over the years, yet since the league format was launched in 1997 the Tunis-based giants failed consistently to win the trophy, twice beaten in the final and three times reaching the semifinals.

Their only success in the tournament came in the days when it was known as the African Champions Cup when they defeat Zamalek of Egypt in the 1994 final. But it is the distinction of being the first club to win all four major African titles that Esperance are best known for.

They added the African Cup Winners’ Cup, Super Cup and finally the CAF Cup in 1997 to their list of successes to achieve this unique feat.

Known as ‘Sang et Or’ (Blood and Gold), Esperance have dominated the domestic scene in Tunisia over the last three decades and have a total of 23 championship titles and 13 Tunisia Cup successes to their name.

The club has provided the backbone for the Tunisian national side over the years with players like Chokri El Ouaer, Khaled Badra, Radhi Jaidi and Ali Zitouni all becoming household names around the continent.