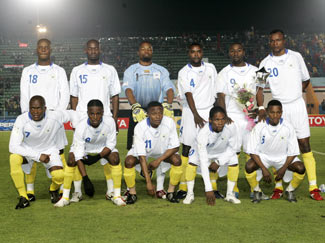 The Democratic Republic of Congo have never qualified for the FIFA World Cup, though when they were still known as Zaire they became the first ‘black’ African side to qualify for world football’s showpiece event, appearing at the 1974 finals in West Germany. That was their one and only appearance at the FIFA event.

Zaire won the CAF Africa Cup of Nations in 1968 and 1974, though their best performance as DR Congo came in the 1998 finals in Burkina Faso when they ended third after being knocked out in the semifinals by South Africa. The Leopards were quarterfinalists in the 2002 and 2006 Nations Cup finals, though they failed to qualify for either the 2008 or 2010 editions.

DR Congo are coached by Frenchman Patrice Neveu and play their home games at the Stade des Martyrs in the capital Kinshasa. Their record goal scorer is Shabani Nonda.

The country’s top flight football division is known as the Linafoot. It was formed in 1958 and presently features 28 sides.

The reigning champions are TP Mazembe, who collected their tenth title in 2009. They trail only DC Motema Pembe (12 titles) and AS Vita Club (11 titles) in the championship stakes.

TP Mazembe are the most successful DRC club on the continental stage, having won the CAF Champions League three times (1967, 1968 and 2009).