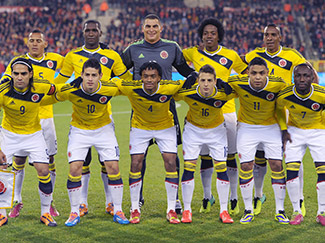 The World Cup in Brazil will be Colombia’s fifth appearance at the showpiece event and first since 1998 were they crashed out at the group stages.
At the World Cup in France, Los Cafeteros finished third in the group behind Romania and England but above Tunisia.
Colombia qualified for next year’s tournament by finishing second in the South American qualification zone on 32 points, 2 points off table toppers Argentina.
Columbia have rocketed up the FIFA rankings, and are currently ranked fourth, thus they are certainly Dark Horses for the tournament.
Colombia are coached by former Argentina boss Jose Pekerman.
Spearheaded by Monaco marksman Radamel Falcao Colombia could cause a surprise or two next year.