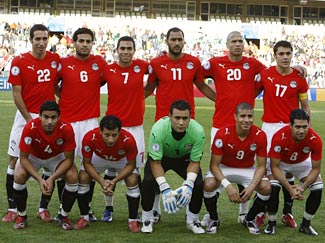 Egypt completed a second successive Africa Cup of Nations triumph as they beat all-comers to claim a record sixth continental crown in Ghana.
Hassan Shehata's side started as they intended to finish, beating Cameroon 4-2 in their opening game, with Hosny Abd Rabo and Mohamed Zidan each getting a brace.
They essentially sealed their place in the quarterfinals with a comfortable 3-0 success over their north African neighbours Sudan, Hosny again on the scoresheet and Mohamed Aboutrika this time the man to score twice.
They were held 1-1 by Zambia, with Amr Zaki in the goals, in their final Group C game, but still did enough to finish top of the pool and book a quarterfinal meeting with Angola.
All of the scoring in that match came in a 15-minute spell in the first half as Hosny gave The Pharaohs the lead, before Egypt were pegged back by Manucho. Zaki restored the north Africans' lead however, and they held on to book a place in the Last 4.
The Egyptians crushed the much-fancied Ivorians 4-1 in the semifinal. After taking an early lead through Ahmed Fathy, they were put further ahead by Amr Zaki, the first of two goals for the striker. Aboutrika put the cherry on top deep into injurytime.
And so they lined-up once again against Cameroon, as they had in the opening match, and this time it was a much tighter affair, though a mistake from veteran defender Rigobert Sing allowed Aboutrika to steal in and score the only goal of the game.