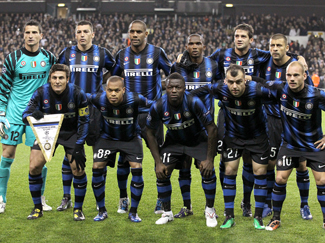 After five successive Scudettos, Internazionale somewhat took their eye off the ball in 2010/11, allowing rivals AC Milan to sneak ahead of them and claim the league championship.
The departure of Jose Mourinho to Real Madrid a year ago will have been a major factor in what was a disappointing season, but their playing staff remained basically unchanged from the 2009/10 season that saw them claim a historic treble of Serie A, Italian Cup and Champions League.
Once again the likes of Wesley Sneijder (assuming he doesn’t move in the transfer window), Samuel Eto’o and seemingly ageless captain Javier Zanetti will be key to Inter’s hopes, but it is the role of manager Gian Piero Gasperini that will be key.
The 53-year-old will be looking to avoid the fate of Rafael Benitez and Leonardo, who were both relieved of their duties after finding Mourinho’s shadow simply too long to step out of.
Inter will once again be locked in battle with Milan in what should be a two-horse race for the Serie A title, while an improvement on their quarterfinal exit in the Champions League (where they were humbled by Schalke) will be expected from demanding club president Massimo Moratti.