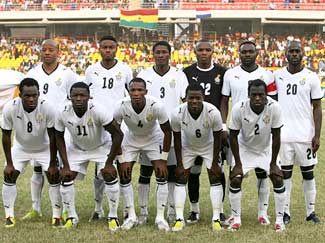 There was much expected of Claude LeRoy's side as they hosted the 2008 Africa Cup of Nations, but despite a third-place finish at the tournament, the overall feeling was one of disappointment and the French coach ultimately lost his job.
The side were missing their talisman Stephen Appiah through injury, but a few players emerged with their repuattions enhanced, not least muscular striker Junior Agogo, who became something of a crowd favourite.
Asamoah Gyan and Sulley Muntari led the side to a 2-1 win over guinea in their opening game, which they followed with a hard-fought 1-0 success over Namibia, Agogo getting the goal.
They completed their Group A fixtures with a comfortable 2-0 success over Morocco, Michael Essien and Muntari scoring the goals, and topped the pool from Guinea.
The Black Stars showed their character to come from behind against Nigeria in the quarterfinals as Yakubu netted forst for the Super Eagles, before Essien and Agogo put the hosts into the semifinals.
There they lost 1-0 to an excellent Cameroon side to break the hearts of the nation, but they finished on a high with a 4-2 success over Cote d'Ivoire in the third/fourth-place play-off as Muntari, Agogo, Quincy Owusu-Abeyie and Haminu Dramani amongst the goals.