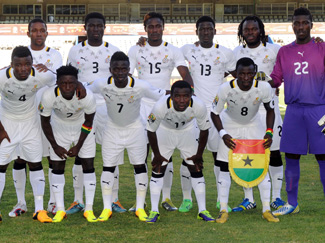 Ghana will be returning to the African Nations Championship (CHAN) to be held in South Africa seeking to win the tournament for the first time.
The Local Black Stars, who were finalists in the first edition of the tournament in Ivory Coast in 2009, qualified for the competition without kicking a ball.
They were scheduled to meet Benin in their only qualifying game to reach the tournament to be held from the 10th of January 2014 to the 1st of February.
However the home-based Squirrels withdrew from the the two-legged qualifier because of problems between their federation and the ministry of sports.
This means Ghana will be making their third successive appearance in the tournament since it started but the sticking point remains that they are yet to win the trophy meant for players playing in the leagues of their countries.
Their aim of winning the title will be easy because of the departure of several key players to foreign team which means they are ineligible to play for Ghana in the competition.
Goalkeeper Fatau Dauda and his assistant Daniel Agyei have signed for South African clubs while one of the first choice strikers Yakubu Mohammed has also joined a club in South Africa.
The Ghana league's top scorer Mahatma Otoo is on the verge of leaving Hearts of Oak for a club in Europe while midfielder Michael Helegbe is likely to move to South Africa.
Coach Maxwell Konadu must hope that the start of the Ghana league in September could unveil more talents to boost his depleted side.
Tournament Review:
Ghana suffered another failed attempt as they lost on penalties in the final of the 2014 African Nations Championship (CHAN) in South Africa.

The Local Black Stars were beaten 4-3 on penalties by Libya after 120 minutes of gruelling football action.

It was the second attempt by Ghana in the three editions of the CHAN event, after losing 2-0 in the maiden tournament hosted by Ivory Coast in 2009.

They were the best defensive side at the tournament after conceding just one goal in six matches and also held the record as the most sterile, managing only four goals.

The beat Congo 1-0 in their opener and drew 1-1 with Libya before capping their Group stage campaign with a 1-0 win over Ethiopia.

Ghana avenged the final defeat of 2009 by knocking out DR Congo at the quarter-final stage with a 1-0 win.

They continued to stay in Bloemfontein and posted a 4-1 penalty shoot-out victory against perennial rivals Nigeria.

Ghana picked up man-of-the-match awards in five matches with exception of the final.