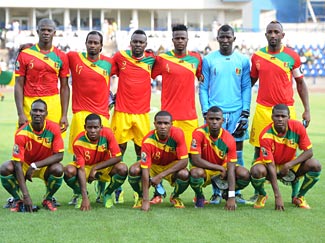 Guinea areback on the biggest stage of African football after they failed to qualify for the event staged in Angola last year.

Before that failure, they had had appeared at the last three editions of the competition.
They finished top of Group B ahead of highly-rated Nigeria, Ethiopia and Madagascar.
The closest they have come to becoming African champions was in 1976 when they lost out by a point to Morocco in a final round-robin format that also included Nigeria and Egypt.
A lot wasexpected of the Syli Stars at the 2008 competition in Ghana, but they were outclassed 5-0 by Cote d'Ivoire in the quarter-final.
France-based goalkeeper Naby Yattara was impressive in the qualifiers and the team are now a fine blend of youth and experience.
Experience comes in the form of long time talisman Pascal Feindouno and big central defender Bobo Balde, while Germany-based midfielder Ibrahima Traore and Kevin Constant represent the new generation.
UAE-based striker Ismael Bangoura is always a goal threat while new skipper Kamil Zayatte, who once featured for English side Hull City, has brought stability in the defence.
Frenchman Michel Dussuyer has made the most of his second stint with the team. Last year, he led Benin Republic to the Nations Cup in Angola.
Former international star Titi Camara is now the country’s sports minister and so this team could be rest assured they will get all the backing they need to fulfil the huge promise they have shown over the years.