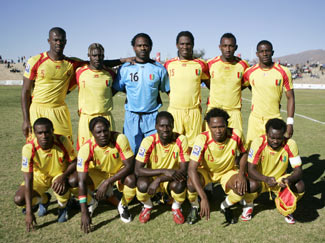 Guinea have been regular features at the last three Africa Cup of Nations tournaments, reaching the quarterfinals on each occasion.
The closest they have ever come to winning the showpiece event was in 1976 when they finished runners-up to Morocco with the tournament being held in Ethiopia.

The winners were determined via a final round of pool matches in those days and guinea could have sealed the title had they beaten the Moroccans in their final group game, but were instead held to a 1-1 draw.
The Class of 2009 are coached by Frenchman Robert Nouzaret, who has extensive experience at club level in France, and has also twice led the Cote d’Ivoire national side, first 1996 to 1998, then between 2002 and 2004.
The majority of his players ply their trade in France, though the likes of Bobo Balde, Ibrahima Bangoura, Pascal Feindouno and Kamil Zayatte make up the spine of the side.
Faced with an imposing group that includes Cote d’Ivoire and the tricky Burkina Faso side, they may well believe that a Nations Cup place is the realistic goal, though they will see that as a bare minimum.