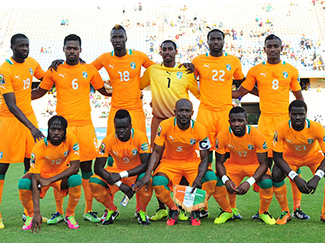 Cote d’Ivoire will be taking part in their third consecutive World Cup finals in Brazil, after appearances in 2006 and 2010.

The Elephants booked their ticket to Brazil via a 4-2 aggregate victory over Senegal in the playoff qualifiers.

Led by Didier Drogba and a generation of very talented players from the MimoSifcom Academy in Abidjan, the Elephants qualified for the 2006 World Cup in Germany at the expense of Cameroon, a first ever for Cote d’Ivoire.

But Henri Michel’s men were drawn together with powerhouses Argentina and the Netherlands which saw make an early bow from the tournament but not before recording their first-ever World Cup victory with a 3-2 win over Serbia-Montenegro.

Four years later in South-African, the Ivoirians failed to escape another “Group of death” after they were drawn alongside Brazil and Portugal.

Cote d’Ivoire yet again made an early exit despite a 3-0 victory over North Korea and a goalless draw against Portugal.

In Brazil, Ivorian football’s golden generation now have a third opportunity to shine on the international stage in what will probably be the swansong for Drogba and co.