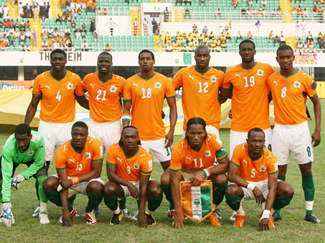 Côte d’Ivoire qualified for their 20th Africa Cup of Nations finals when they disposed of the Lions of Senegal in the final round of qualifiers, with a notable historic victory in Dakar.

Ranked as the number one African nation (16th worldwide) on FIFA’s latest rankings, the team will once again be one of the most serious candidates for the continental title at the 2013 Afcon in South Africa.

The Elephants won the 1992 edition, but have failed twice in the final since then, in 2006 and in the last tournament in Gabon and Equatorial Guinea where they lost in a penalty shootout against Zambia.

This coming tournament represents what is perhaps the last chance for a whole golden generation of international Ivoirians to finally lay their hands on the continental trophy, that of Didier Drogba and the very first Académiciens of ASEC Mimosas; Copa Barry, Kolo Touré, Siaka Tiéné, Didier Zokora, Igor Lolo, Romaric N’Dri.

The national team coach Sabri Lamouchi, who was appointed to the position of head coach as replacement to François Zahoui in May, will be counting on experience to attain their goal.

For the group phase draw of the 29th Africa Cup of Nations that will take place on 24 October in Durban, Côte d’Ivoire find themselves among the top seeds in Pot 1 - along with the host nation, South Africa, the title-holder, Zambia, and Ghana.