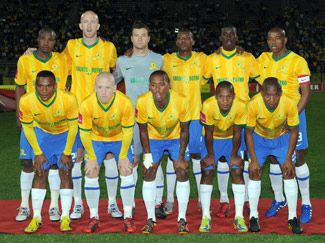 Mamelodi Sundowns have been trophy-less for four season now. They have not won any silverware since 2008 and the MTN8 presents a great chance for the Brazilians to change all of that.
Their best performance in this competition came in the inaugural event in 2008 when they were narrowly defeated by their arch rivals Kaizer Chiefs in the final in a penalty shoot-out.
Their goalkeeping department looks solid with three ‘keepers with international experience under their belt. Wayne Sandilands will once again be the key man in between the sticks.
The backline also has some formidable players and a bit of youth and inexperience. It will be an interesting dual between Punch Masenamela and Tebogo Langerman for the left-back position.
The central defence position has mobile and quick players who can also be played in other defensive positions. The only spot in defence which looks thin is at right-back where they don’t have an outright starter.
The midfield has a star-studded cast, an area where ‘Downs have arguably one of the best departments in the league.
Their wingers, especially Elias Pelembe and Lebohang Mokoena are skilful and speedy and Teko Modise has risen from the ashes.
Surprise Moriri looks rejuvenated, Hlompho Kekana is as tough as nails and new signing Thamsanqa Sangweni will bring a fresh approach.
Up front Katlego Mphela, Nyasha Mushekwi and Edward Manqele will battle it out for the centre-forward position as coach Johann Neeskens prefers a single striker upfront supported by the wingers.