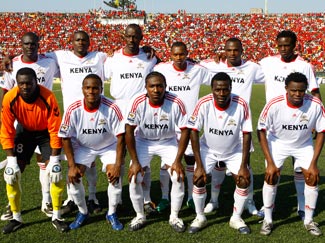 Kenya will fancy their chances of an upset in Group J having come close to qualifying for the 2010 Africa Cup of Nations in Angola.

That was under German coach Antoine Hey, who has since been replaced by his assistant Twahir Muhiddin, the man tasked with taking the side to Equatorial Guinea and Gabon.

There is talent to work with there, though the loss of veteran midfielder-cum-defender Musa Otieno to retirement is a major blow.

The emergence of midfielder McDonald Mariga at Italian Serie A giants Inter Milan is exciting for fans, while striker Dennis Oliech (Auxerre, France) remains a key source of goals.

Kenya have made five previous appearances at the Africa Cup of Nations, but have never been passed the first round of the competition, and the last of these was in 2004.

Briefly barred by FIFA for government interference in the running of the game a few years ago, they are now well and truly back in the fold and would dearly love to earn a repeat of their appearance at the finals in Tunisia six years ago.