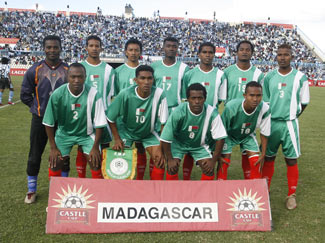 Madagascar, also known as ‘Barea’ are currently ranked 154th on the FIFA rankings, with their best ranking having come back in December 1992, when they were listed in 74th position.

Football on the island country competes for popularity with rugby, and Madagascar’s record at major tournaments is non-existent – they have never qualified for a World Cup final, nor the African Cup of Nations finals.

The country’s most famous win could well be their 1-0 home victory over north African giants Egypt in a 2004 African Cup of Nations qualifier.
The bulk of the current national team all play in the local domestic leagues, although there are also a handful of players active in the lower leagues in France.
The league structure in the country is somewhat different to that found in most football league systems around the world. The highest division to play in is called the THB Champions League, which compromises of the best 32 teams, selected from 22 regional leagues.
This has ensured that despite the league having been in existence since 1962, no club has won more than four titles, a feat achieved by AS Fortior, whose last triumph came back in 2000.