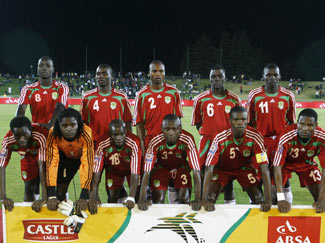 Malawi are seeking just a second visit to the finals of the Africa Cup of Nations, with their only other tournament showing at the 1984 event in Cote d’Ivoire when they were knocked out in the first round.
They did manage a creditable 2-2 draw with eventual losing finalists Nigeria on that occasion and it is that similar kind of spirit they will need to muster if the Class of 2009 is to emulate that feat 25 years ago.
They have tasted some success in continental competition before when they won bronze at the 1987 All Africa Games in Kenya with much the same squad that had done duty in Cote d’Ivoire, while they have also claimed the East African CECAFA championship on three occasions as well in 1978, 1979 and 1988.
The current side is coached by experienced tactician Kinnah Phiri, who made his name at Bakili Bullets in his homeland, but has also coached Free State Stars in South Africa and the Malawian Under-23 side.
Many of the national play their football in South Africa, at both the Premiership and First Division level, while there are a handful of star who ply their trade in Europe, such as Essau Kanyenda (FC Kamaz, Russia) and Russel Mwafulirwa (IFK Norrköping, Sweden).